VICTORY FOR ANA AS COURT STRIKES OUT CASE 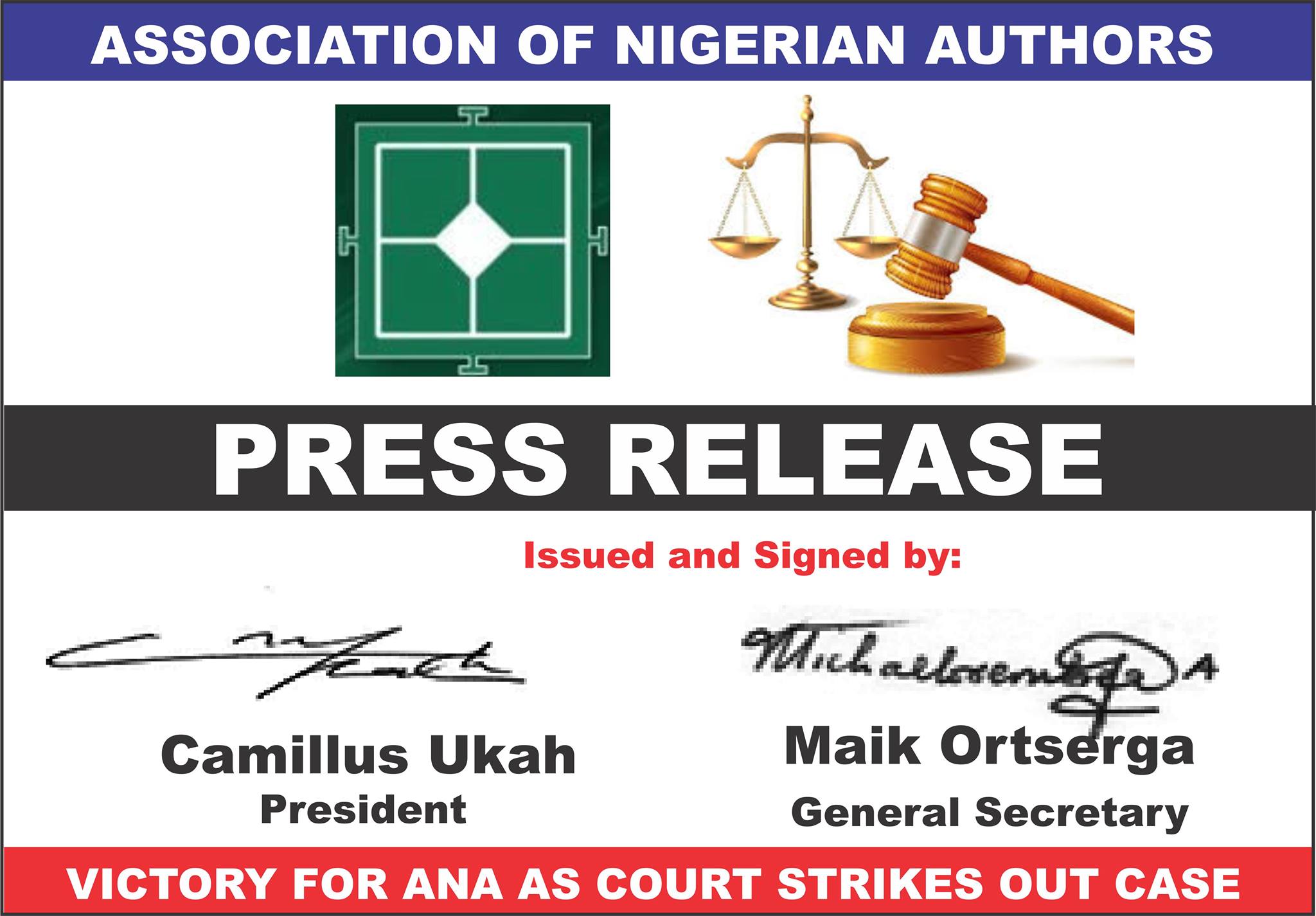 The 12th of January,2021 will go down in history as the day the court affirmed that the largest body of writers in Africa, Association of Nigerian Authors (ANA), is truly illustrious- an elite body that has the uncommon internal mechanism to steer its own ship on the right path even in the face of demonic turbulence. After the botched Enugu 2019 convention with its attendant toxic politics, the ANA BOT and Advisory Council took clear headed steps guided by the association’s constitution to restore what was lost to the unprecedented Enugu impasse. Never in the history of our noble association has there been so much reckless disregard for decency in the barefaced insult of our iconic elders and the spread of satanic lies in the pursuit of selfish interests. Estimably, our responsible elders, supported by a devoted congress, took a productive leap above the fouled air, in rare display of dependability and patriotism, refused to be blackmailed out of focus and finally achieved their aim in restoring ANA once again to the path of progress.

While the association has since taken a kinetic rise in search of a better world, some group of implacable dissidents yet kept fanning the spread of malicious lies about certain court order and eventual verdict that will turn the world upside down. This is why we see the striking out of the suit instituted by Ahmed Maiwada for and on behalf of himself hiding under the nomenclature of a fictitious Registered Trustees of the Association of Nigerian Authors against Professor Jerry Agada & 6 Others at the FCT High Court 17 Maitama, Abuja on Tuesday 12 of January, 2021 as a remarkable victory for ANA and a vindication of the resolve of our elders and the larger congress to walk on the path of integrity and honour.

It is now obvious that those who deserted the truth pretty systematically at the trials have conclusively been exposed by the final judgment as pathological liars. They had blatantly lied to all who cared to listen that the court had given a restraining order against ANA leadership thus misleading their unsuspecting followers in keeping faith with their character of lying without conscience. They even boasted to their fellow travelers, who knew little about the workings of the court that they were going to lockup some of the leading lights of ANA for contempt of court that happened only in their frenzied imagination.
The ruling was straight forward from the heart of Honourable Justice Peter O. Affen, a judge, who knew exactly what he was doing. He made the points explicitly, let his words speak for him: “having carefully and insightfully examined the supporting and counter affidavits annexed thereto and the arguments canvassed by counsels on both sides of the divide, it does not seem to me, on a balance of probabilities, that the institution of this action was dully authorized by the relevant organs of the claimant… since the Trustees who are statutory members of the claimant’s council or governing body have disassociated themselves from the suit, it seems to me obvious that the action is plagued by incompetence for being unauthorized…”

Funnily, the leadership of a certain dissenting group, so anxious to convince their supporters, had also painted a deceitful picture to the less discerning minds that the association has been existing without functional Board of Trustees and even took a step further to embarrass Prof. Bode Sowande with a fake BOT chairmanship appointment. In contrast, the court has proved otherwise. With this judgment, the court has thrown a torch into the dark alleys of such dishonest moves; in doing so, it revealed certain vaulting ambition to the world. It is a judgment that screams out to be quoted as a future reference.

We hope this judgment will finally put to rest all the raised dusts such that every well-meaning member of ANA will no longer be confused henceforth. The judgment is in line with what we have always known. It is the same conclusion that was reached when Barr. Ahmed Maiwada ran to the police crying foul, it is the same common tone that the ANA BOT and the Advisory Council have been singing all the while. Now that both the law and law enforcement agency have spoken with the voice of respect for the association and its internal capacity to resolve its matters, every ANA member with the paternal DNA of a writer must join hands to ensure that never shall our dirty linen be brought as close to the outside as the corridors of our formidable house.

Finally the judgment has naturally defined the right passageway to the open doors of camaraderie that ANA is known for and the door has been thrown open wider now to all writers of goodwill. There is ample room for repentance and reintegration. The more the merrier. Let us together build an ANA that will continue to live up the dreams of our founding fathers. All glory to God as we dedicate this victory to the loving memories of Professor Jerry Agada, who even in death has not forsaken the ideals of ANA.