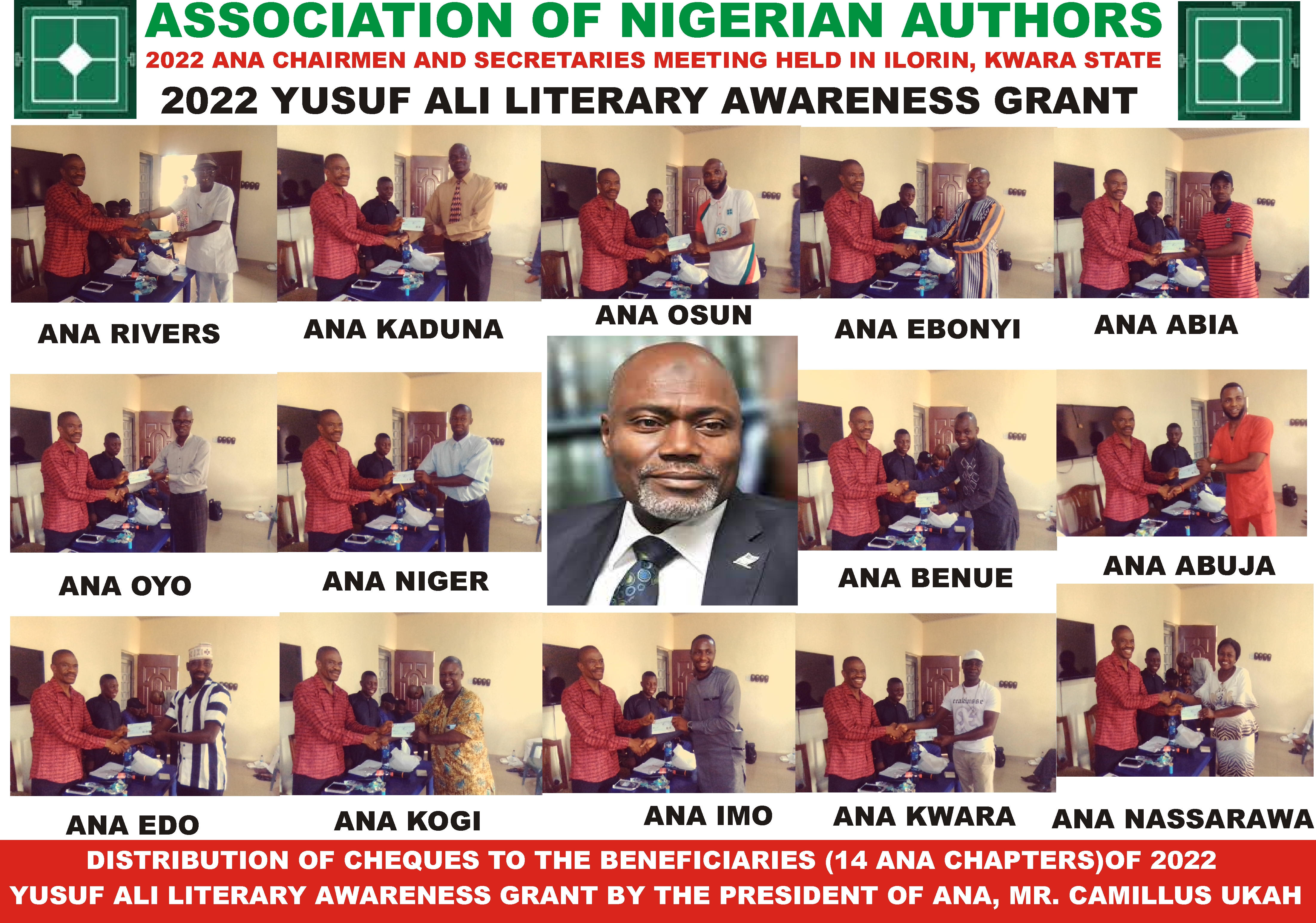 By EDOZIE UDEZE On Mar 20, 2022 Ilorin, the Kwara State capital, came alive for literature penultimate weekend. It was the gathering of members of the Association of Nigerian Authors (ANA) where the national executive council and the state chapters chairmen and secretaries held sway. The topical issues of discourse centered mainly on how to deepen literature and then pay proper attention to the development of children literature. EDOZIE UDEZE was there. Penultimate weekend, in Ilorin, Kwara State, literature came alive. Literature resonated in many ways to ignite the town and set writers on the road to write more. It was a moment of intense literary razzmatazz when the national executive council of the Association of Nigerian Authors (ANA) met to deliberate on ways to widen the grip of literature on the society. State chairmen and secretaries came from different states and locations. Their aim was clear – to look into the annual programmes and see how to set the ball rolling. The objective this year is to concentrate on the development of the literary minds and the reading acumen of children. ANA president, Camillus Ukah put it more succinctly. “It is to catch them young and not necessarily to make each child to aspire to be a writer, but to have the keenness about reading, about studying, grasping the essentials of education right on the dot of time”. And so it therefore became much easier to tag the project a child a week a book project. The target is to ensure that books are made available to schools in states where the project is in operation this year. About a hundred books per secondary school in which case that by end of one year, a child may have been able to read at least 52 books. It seemed a tall order. But it worked before and ANA hopes it will continue to work, so that the new crop of secondary school children will have a rethink about books, about scholarship and enlightenment. Apart from the reports by the members of the national executive council of the association concerning the state of literature in Nigeria and beyond, state chairmen and secretaries were in cheering good moods about efforts to keep prospering literary awareness at the grassroots. In the throes of it all, Kwara State chapter of ANA, as usual, was tagged the doyen of ANA executive meetings. This is so because in the past years, even when it seemed unfathomable, the state had hosted these meetings. This year’s was also done with pomp and pageantry amid great hilarious acclaims by writers. Hosted at Usman Mustapha’s Imodoye Writers Enclave, located at Fate-tanke, Ilorin, the cozy, quiet ambiance was apt. Even the usual Ilorin hot weather, intense this time of the year, did not deter writers. As the sun blazed at its highest height, the atmosphere inside the hall remained intellectually charged as authors sat in clusters geared up for the business of the day. Three issues preoccupied their minds more. The first was the children book project which took more time to thrash out. Oh yes, states were given cheques to handle the project and to also monitor it to its logical conclusion. And because more states than was envisaged showed interest this year, the amount of money allotted was made to go round, serving the same purpose. So, the schools are taken as the pilot schools. Reports from states showed that former exercises in this regard have fared well. While some states have done far too well, others were chided to improve upon their past records. But generally, it was clear that this project occasioned by Yusuf Ali’s (SAN) yearly monetary largess to ANA has come to stay, has come to make literary acquisition by children a reality, a plausible option to illiteracy. The second issue was the state of ANA writers village, Mpape, Abuja. This was clearly tied to the 40th convention anniversary of ANA last year. Briefings from those closely connected to the issues gave kudos to ANA members for the huge success of the 40th anniversary. Yet, it was clear that part of the structures at the centre have been altered. Where it was supposed to be writers chalets, it has now been turned into hotel rooms. Ukah said, “You know hotels yield revenue fast. And we need more money to continue to fund the project. Once the hotels are completed and in use, we begin to realize revenue from it for ANA”. Amid this, it was time to thank the members who endeavoured to attend. Ukah put it this way: “I thank you all for the efforts to be here in spite of the general insecurity in the land. The times are difficult, but to you all, literature must thrive, authorship has to be given a priority attention. Therefore, we are here not only to discuss the business of writing, but to also see to it that this association is totally devoid of constant rancor and avoidable divisive tendencies.” https://thenationonlineng.net/authors-meet-in-ilorin-discuss-developmental-literature/