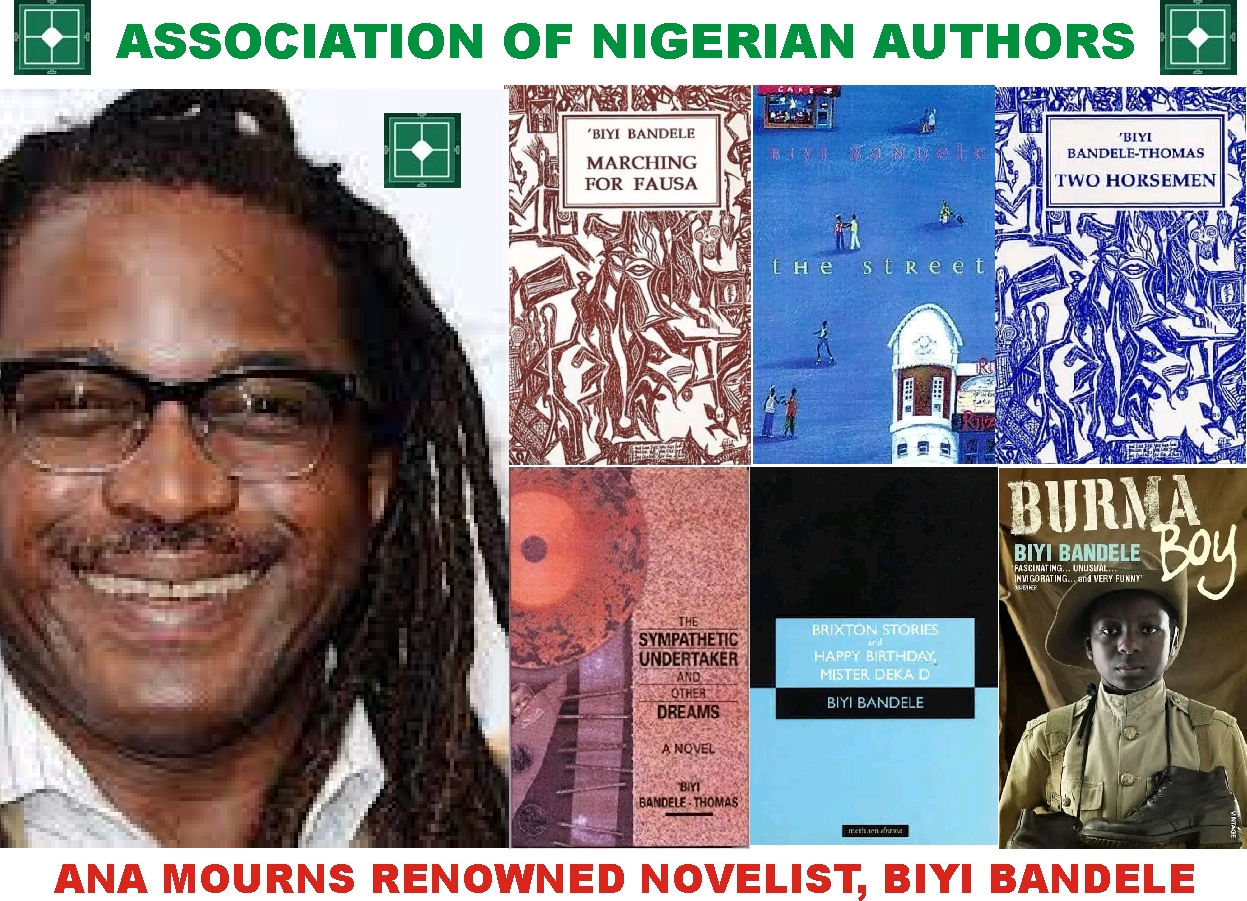 The President of the Association of Nigerian Authors (ANA), Camillus Ukah has expressed sadness over the passage of the renowned novelist, playwright and filmmaker, Biyi Bandele.

ANA described the death of Biyi Bandele as shocking and a monumental loss to the book and film industries.

In a statement by ANA’s General Secretary, Maik Ortserga in Makurdi on Tuesday said ANA President extended his condolences to the Bandele’s family, literary community and all who drank from the writer’s fountain of knowledge.

According to the release, “We in ANA received with sadness and a deep feeling of great loss, the news of the passing away of Biyi Bandele, a renowned novelist, playwright and filmmaker.”

“It is painful that Biyi Bandele left the scene at a time the filmmaking industry needs his wealth of experience, but we take solace in the fact that he lived a fulfilled life in the service of humanity to the glory of God.”

While noting that death is an inevitable end to every mortal existence, ANA President said members of the Association were however consoled that the late Biyi Bandele, distinguished himself as an astute and exemplary novelist and filmmaker”.

ANA prayed that God in His infinite mercies grant the bereaved family the fortitude to bear this sad loss and that the almighty Creator grant the deceased eternal rest.

Biyi Bandele (born Biyi Bandele-Thomas; 13 October 1967 – 7 August 2022) was a Nigerian novelist, playwright and filmmaker. Bandele was a UK-based Nigerian writer for fiction, theatre, journalism, television, film and radio. He moved to London in 1990.

Bandele was born to Yoruba parents in Kafanchan, Kaduna State, Nigeria in 1967. His father Solomon Bandele Thomas was a veteran of the Burma Campaign in World War II, while Nigeria was still part of the British Empire. Bandele spent the first 18 years of his life in the north-central part of the country.

Bandele had ambitions to be a writer and when he was 14 years old he won a short-story competition.

Later on, he moved to Lagos, then in 1987 studied drama at the Obafemi Awolowo University, Ile-Ife. He won the International Student Playscript competition of 1989 with an unpublished play, Rain, before claiming the 1990 British Council Lagos Award for a collection of poems. He moved to London in 1990 at the age of 22 armed with the manuscripts of two novels. His books were published, and he was given a commission by the Royal Court Theatre.

Bandele worked with the Royal Court Theatre, the Royal Shakespeare Company, as well as writing radio drama and screenplays for television. His plays include: Rain; Marching for Fausa (1993); Resurrections in the Season of the Longest Drought (1994); Two Horsemen (1994), selected as Best New Play at the 1994 London New Plays Festival; Death Catches the Hunter and Me and the Boys (published in one volume, 1995); and Oroonoko, an adaptation of Aphra Behn's 17th-century novel of the same name. In 1997 he did a successful dramatization of Chinua Achebe's Things Fall Apart. Brixton Stories, Bandele's stage adaptation of his own novel The Street (1999), premiered in 2001 and was published in one volume with his play Happy Birthday Mister Deka, which premiered in 1999. He also adapted Lorca's Yerma in 2001.

He was writer-in-residence with Talawa Theatre Company from 1994 to 1995, resident dramatist with the Royal National Theatre Studio (1996), the Judith E. Wilson Fellow at Churchill College, University of Cambridge, in 2000–01. He also acted as Royal Literary Fund Resident Playwright at the Bush Theatre from 2002 to 2003.

Bandele has written of the impact of John Osborne's Look Back in Anger, which he saw on a hire-purchase television set in a railway town in northern Nigeria:  And so although I had yet to set foot outside Kafanchan, although I knew nothing about postwar British society, or the Angry Young Men, or anything about Osborne when I met Jimmy Porter on the screen... there was no need for introductions: I had known Jimmy all my life.

Biyi Bandele's novels, which include The Man Who Came in from the Back of Beyond (1991) and The Street (1999), have been described as "rewarding reading, capable of wild surrealism and wit as well as political engagement." His 2007 novel, Burma Boy, reviewed in The Independent by Tony Gould, was called "a fine achievement" and lauded for providing a voice for previously unheard Africans.

His directorial debut film Half of a Yellow Sun was screened in the Special Presentation section at the 2013 Toronto International Film Festival, and received a "rapturous reception". The film received a wide range of critical attention. His new film, entitled Fifty, was included in the 2015 London Film Festival. He also directed the third season of the popular MTV drama series, Shuga. In 2022 he directed the first Netflix Nigerian Original series, Blood Sisters.

He was announced as the director of the new Netflix and Ebonylife TV co-production Elesin Oba, The King's Horseman the screen adaptation of Wole Soyinka's stage play Death and the King's Horseman, and is set to premier at the Toronto International Film Festival in September 2022.

His untimely death was announced on Facebook by his daughter, on 9 August 2022. The cause of death has not been confirmed.

The Man Who Came in From the Back of Beyond, Bellew, 1991

The Sympathetic Undertaker: and Other Dreams, Bellew, 1991

Resurrections in the Season of the Longest Drought, Amber Lane Press, 1994

Death Catches the Hunter/Me and the Boys, Amber Lane Press, 1995