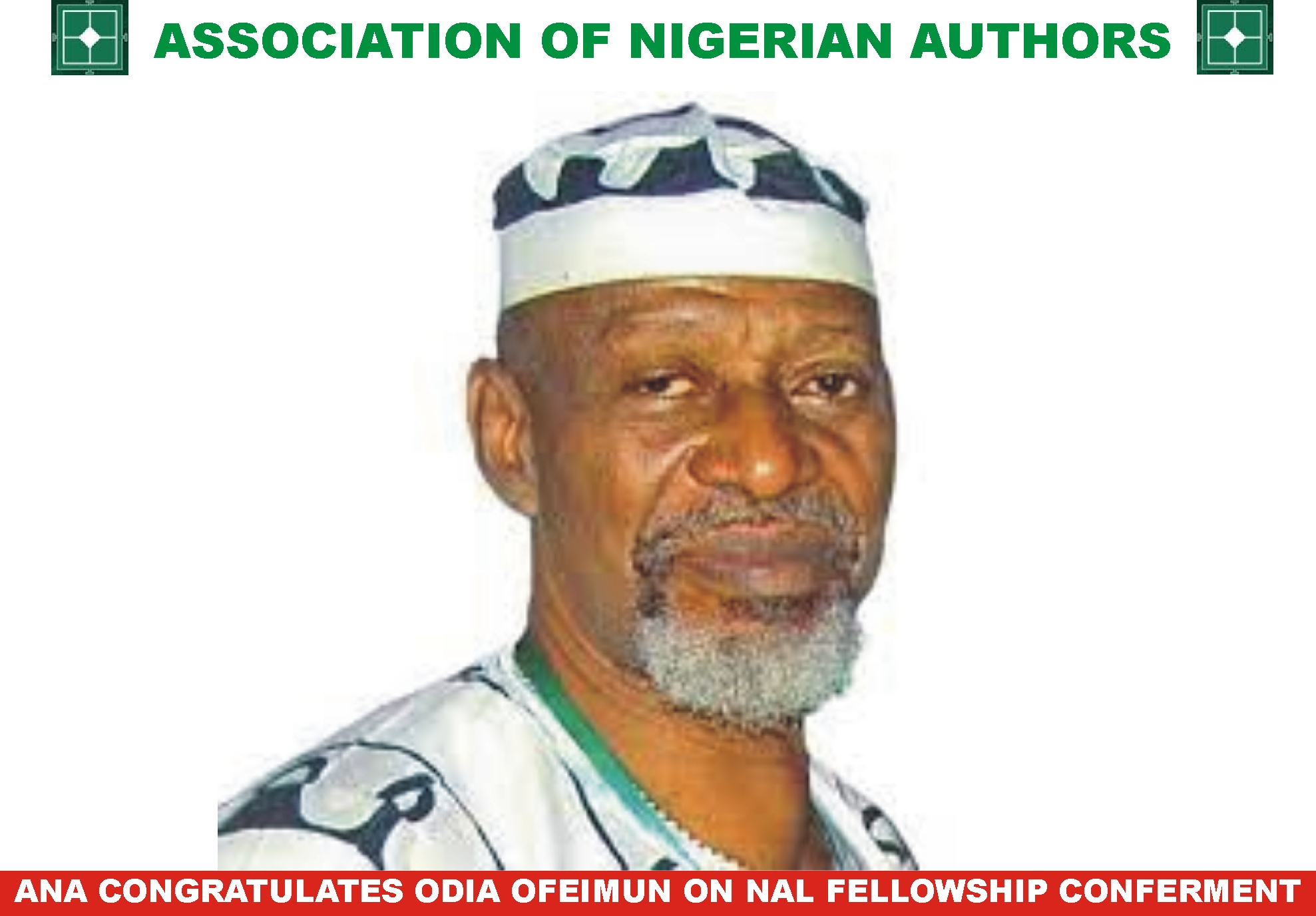 By ANA Publicity Committee ANA President, Camillus Ukah has congratulated Odia Ofeimun, a renowned poet and former President of the Association on the conferment of Fellowship status of the Nigerian Academy of Letters on him. This was contained in a letter signed by the President and General Secretary of ANA, Camillus Ukah and Maik Orsterga respectively. According to the Letter, the Fellowship status of NAL is given rarely to distinguished Professors after a rigorous election exercise. The Letter partly read, “On behalf of the National Executive Council of the Association of Nigerian Authors (ANA) and as your compatriots, we heartily congratulate you for being admitted into the College of Fellows of The Nigerian Academy of Letters. With this new and prestigious status, you have brought honour to ANA and we are sure that every Nigerian writer will feel proud of your achievement today.” “The Association of Nigerian Authors (ANA) is indeed fortunate to have you as one of her past presidents. We fondly recall your participation at ANA conventions and your insistence at all times that everything should be done to make ANA a great association.” “This new status is, therefore, a well-deserved recognition Sir. There is no doubt that the Academy of Letters is, by this gesture, in full recognition of your contribution to literature and society as a well-garlanded and decorated poet, essayist, dramatist, activist, journalist; politician and polemicist.” “May God’s blessing be with you as you continue to guide the society towards the right direction with your writing.” The Nigerian Academy of Letters is a national academy and apex body of arts and literature in Nigeria. It is an autonomous, scholarly and non-political state institution for advancing scholarship and public interest in the humanities at the highest level in Nigeria. Established in 1974 after recommendation of "Udoji report of 1974" it is currently governed by executive committee of distinguished professors and promote limited number of four types of fellows; Foundation Fellows, Regular Fellows, Overseas Fellows and Honorary Fellows on a yearly basis. Odia Ofeimun, poet, polemicist and polymath was born in Iruekpen-Ekuma, Edo State, Nigeria, on 16 March, 1950. The author of 10 significant volumes of poetry, Ofeimun has also published two books of political essays, four books on cultural politics, as well as editing two anthologies of Nigerian poetry. Widely anthologized and translated into many world languages, Ofeimun has read and performed his poetry in several countries of the world including Ghana, South Africa, Ethiopia, India, South Korea, Columbia, Germany, Israel, Great Britain, China, the United States of America, Venezuela, Mexico, Cuba, Sweden, Italy and Cuba. At home in Nigeria, Ofeimun’s practice of journalism, spanning the years of military tyranny, has inspired a whole generation of journalists in print and electronic media. The principled stand of Ofeimun came at the price of random invasion of his residence, seizure of his manuscripts, computer discs and Nigerian passport, to deny him freedom of movement. Undeterred, and while practicing probably the most dangerous vocation of all at the time, Ofeimun served the Association of Nigerian Authors as General Secretary and President respectively. He has been a designated advisor to PEN Nigeria Centre and is a founding member of the Pan-African Writers Association. Ofeimun is the recipient of many awards the latest of which is the prestigious Fonlon-Nichols Award for literary excellence and propagation of human rights, which was conferred on him by the African Literature Association in 2010. In a literary career spanning four decades, Ofeimun has distinguished himself with poetry and essays that challenge both the imagination and the intellect, crossing cultural borders and establishing new benchmarks in the articulation of the African narrative. His essays are valued both for knowledge and analysis, for what to know and for how to think about what is known. Ofeimun is fondly called ‘Baba’ by the post-civil war generation of Nigerian writers, many of whom have found touchstones in his works or have been individually mentored in writing by him. For his copious literary output, while engaged with anti-military rule struggle in Nigeria, Ofeimun has been called an exemplar of conscionable and consistent writing and the writerly life.